The Taxi Advisory Council meeting for 11-28-11 has been canceled.  There will not be enough members attending to have a quorum.

Happy Holiday.
Posted by Crocker Amazon at 5:46 PM No comments: 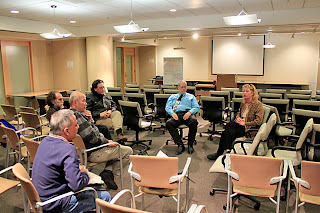 A new series of Town Hall Meetings began on Monday, November 14th to discuss, "Consideration of Proposals for the Future of Taxicab Sales."

I couldn't come on Monday but caught the end of the afternoon session on Tuesday, November 15th and stayed for the evening (see schedule below). 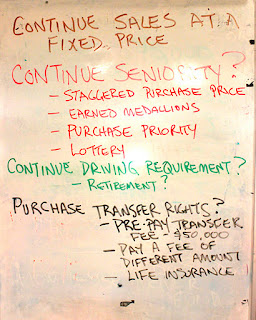 Forgetting that he was talking to cab drivers and not trying to snow City Supervisors or the general public, Richie Weiner tried to convince everyone that drivers would make more money if more cabs were put on the street. However, most of the conversations generally followed the outline on Hayashi's whiteboard.

Despite the small turnout almost all the usual points of view were put forth on the question of sales:

There was debate as to whether or not medallion holding drivers should continue to have a driving requirement or be able to retire and continue to hold the medallions at ages 65 or 70.

The idea behind purchasing transfer rights is to give medallion holders of selling age a chance to continue working their medallion after they agree to sell. If they paid the $50,000 transfer fee in advance, they would be able to sell anytime afterwards and the money from sales would go to their families if they died before selling it themselves.

Having exhausted these subjects for the moment we went on to a discussion of the Driver's Fund which now has $2.4 million in it.


Tariq Mehmood himself honored us with his presence while we were talking and sat silently listening to what we were saying for fifteen or twenty minutes. I had never before seen him go without speaking for such an extended period of time and wondered if he had been reading How to Win Friends and Influence People or I'm Okay, You're Okay. Had the Mehmood become a team player and developed an interest in the thought, opinions and feelings of others?

"The Driver's Fund is not for discussion !" Tariq loudly decreed when he finally graced us with his speech. "We will now talk about the sales program!" Then, he lectured us in a loud, abrasive monotone for a half an hour, before proclaiming, "The age should be 70!"

There didn't seem to be much to add so we went back to discussing ways to grow the Driver's Fund so that it would be large enough to help with medical benefits. Christopher Fulkerson mentioned that the companies owned the drivers  millions of dollars from an agreement made with the old Taxi Commission. I thought a percentage of the meter drop could be helpful.

"We are not here to talk about medical benefits!" Mehmood commanded. "$2.4 Million dollars is not enough for a medical program!" He then proceeded to spend eight and a half minutes educating us on the details of his profound insight. Then, he left.

The next sessions will be on Tuesday, November 22nd from 2 to 5 and 5 to 8 as per the below schedule. Earplugs are optional.

Posted by Crocker Amazon at 4:05 PM No comments: 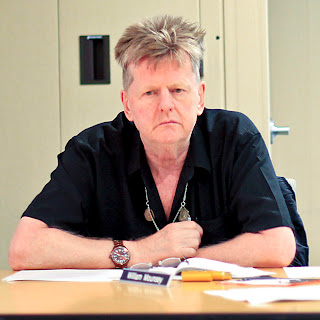 1. Changing the current requirement for annual driver renewal (A-cards) from December 31st to the month of the driver's birthday.

2. Ending the requirement for evidence of financial responsibility for new driver permits.

3. 100 of the 156 wheel chair pick-ups per year required by Ramp Taxi must be reported through the paratransit debit card system.

1. Clarifying that a medallion buyer may sell his medallion at any time.


3. Re-opening the opportunity to sell his or her medallion to any Medallion Holder who is subject to the Full-Time Driving Requirement who has attained or will attain the age of 60 as of December 31, 2012.


Number 2 is somewhat confusing - especially in light of number 3. Does this mean that a medallion holder will never get another chance to sell his or her medallion if he or she doesn't jump at the first opportunity? Or, will she or he have another opportunity come up whenever the Taxi Services runs out of medallions to sell? It's certainly not clear to me.


Number 3, on the other hand, is clear but controversial. The proposed legislation excludes Pre-K medallion holders from another opportunity to sell their medallions. All drivers over 70 had been given the change to sell when the Sales Pilot Program first went into effect.


Naturally, the measure led to a sharp division - generally between owners and medallion holders vs non-medallion holding drivers -  among both the Taxi Advisory Council and the people in attendance.


Drivers on the Waiting List saw this as a good move for four main reasons: (1) Pre-K's have already made a million dollars off of each medallion, (2) They had a chance to sell last year and were greedy not to do so, (3) Even if they can't sell, they would still have a guaranteed income of over $2,500 a month and (4) The Pre-K medallions would ultimately end up going back to the Waiting List.


The owner/medallion holder faction argued that the legislation was: (1) Unfair because the medallion holders were not informed before they made their choice last year, (2) They should have the right to sell any time because, unlike Post-k's, they actually paid for their medallions.(3) Thus not to let them sell would be "unconscionable."


The owner faction moved to squash the legislation and the measure was put to a vote which ended in a six-six tie, meaning that the legislation goes to the SFMTA Board for public hearings and the final thumbs up or thumbs down.