In this post I want to address a few concerns and clarify some aspects of the Flywheel app.

My information comes from a recent Town Hall meeting where CEO Steve Humphreys spoke as well as from conversations with Humphreys, Chief Product Officer Sachin Kansal and Head of Operations Ryan Nobrega.

Director Hayashi had a plan B.T. (before tncs) where the city would pay for all credit transactions with a $0.25 - $0.30 fee for all passenger. But this probably is not workable in our current scenario where we're being underpriced by the competition.

Flywheel is a for profit company and has to charge something. They have credit processing fees, payroll, rent, marketing, R&D and other costs to cover. I have no idea what their bottom line is but I would like to see a fee closer to 5%.

I bought the subject up to Humphreys. He hinted that they might be able to lower the percentage if they could lower their processing costs or if the volume of users drastically increased.

One positive is that, unlike Uber, Flywheel does not take a percentage of the tips. This means that the actual percentage of a driver's gross is closer to 8.5%.

Flywheel Amps Up Together with the MTA 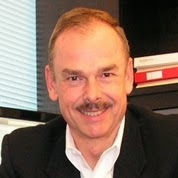 One had it that Uber had bought out Flywheel. A more recent canard claimed that Flywheel changed its name from Cabulous to get "cab" out of the title because they intended to begin a peer to peer taxi service ala Summon.

I spoke with CEO Steve Humphreys (photo left) about this and he said that Uber would buy Flywheel "over my dead body." He also said that he had no interest in starting a ride-share operation because he thinks that taxis will win out in the long run. Insurance and the superiority of trained taxi drivers over untrained amateurs, in his opinion, will carry the day.

Humphreys, a man with an engaging smile and infectous enthusiasm, agreed with the thought that once the accidents start adding up, "the other options won't look so attractive."

Flywheel Partnering with the SFMTA

Starting tomorrow, June1, 2014, Taxi Services will be running a series of advertisements boosting the taxicab business in which Flywheel will get prominent mention.

This, course, is the brainchild of Director Christiane Hayashi who was the person who first introduced Flywheel (then Cabulous) to San Francisco taxi drivers almost four years ago.  Humphreys has been working closely together with Hayashi and Director of Transportation Ed Reiskin to make the marketing effort pay off.

The promotion will go at least through June and possibly longer. 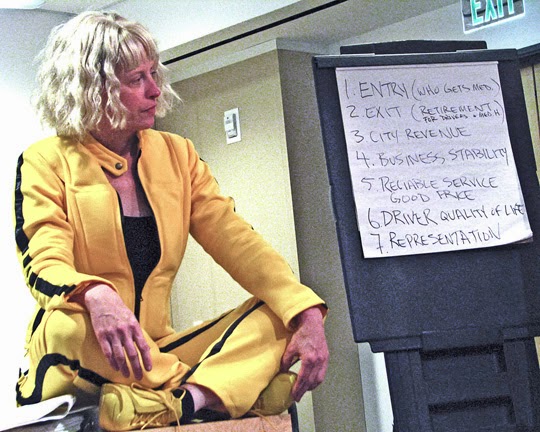 San Francisco voters approved Proposition K in 1978 which put an end of the sale of taxi medallions.

San Francisco voters passed Proposition A in November 2007 giving the Board of Supervisors the option of transferring the powers of the Taxi Commission to the SFMTA. The Supervisors did so and the SFMTA took over the regulation of the taxi industry on March 1, 2009.

In January of 2009, Mayor Gavin Newsom, who had promised not to put medallions up for sale if Proposition A passed, came out with a plan to take all the taxis medallions away from the current medallion holders and sell them in order to cover San Francisco's $500 million dollar debt.

Chris Hayashi & the Wisdom of Solomon 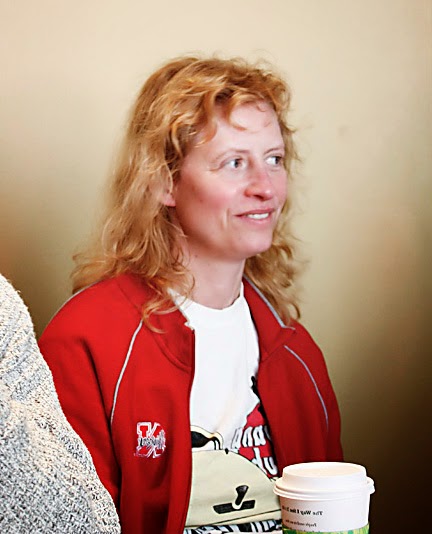 Director of Taxi Services Christiane Hayashi has had an extraordinary impact on the cab business that goes far beyond anything you might reasonably expect from an administrator.

Her uniqueness become evident to me the first time I saw her at a Medallion Holder Association (MHA) meeting in 2009, shortly after Mayor Gavin Newsom had threatened steal all the taxi medallions and sell them to cover San Francisco's $500 million debt.

What struck me about her was the absolute absence of any sense of snobbery or superiority of rank.

Maybe I can best get my idea across by contrasting her behavior to that of MTA Board Member Bruce Oka who also came to the meeting. Oka was all smiles but he also let us know how important he was. He told us that he was in a hurry and could only stay a little while. He also hinted at inside knowledge of Newsom's plans that he couldn't quite express to us. In short, he acted like people of position usually do when glad-handing the lower classes.

Hayashi, who undoubtedly knew more about Newsom's plans than Oka did, simply sat down next to a few drivers and talked to them like they were fellow human beings. I've rarely seen anybody who held power over others act so modestly.