The ABC coverage of this attack was sent to me by driver Dave Schneider who writes. 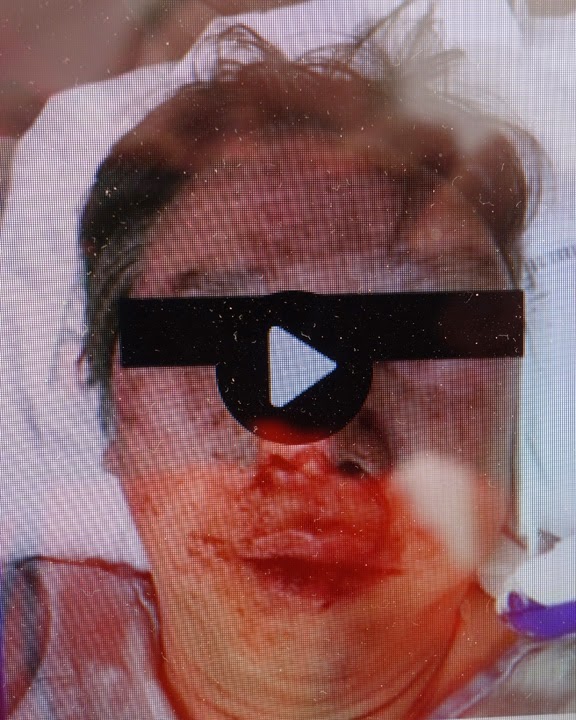 "Think reality is all it's cracked up to be with its two bit acts and players ... low level challenges right?

For what it's worth perhaps I didn't follow proper procedure and no one elected me and I ain't no perfect person, still I've been in communication with SFMTA regulators re a discreet panic button also advocated by a lady veteran driver.  I just get the run around.  Maybe it's my bad karma.  Had that panic button been in place going directly into 911 it might have helped in the recent bloody attack on the cab driver.

However, at the same time, the cab driver followed the perp and asked for the $.  That turned out to be a bad mistake as the driver was beaten to a pulp.  Perhaps a rookie mistake -- although maybe you can't blame him.  Hey I ain't no perfect person, but I wouldn't have followed him.

I also couldn't even get the bastards at the SFMTA to issue a public service annoucement of the location of the new Mission Bay UCSF children's emergency at Mariposa and Minnesota off of 3rd Street so you think they are going to lift a finger to protect the cabbies they regulate?

Give me a break ... and I ain't no perfect person to say the least.  But the protection of human life ought to be beyond the worth of the messenger/s don't you think ... ." 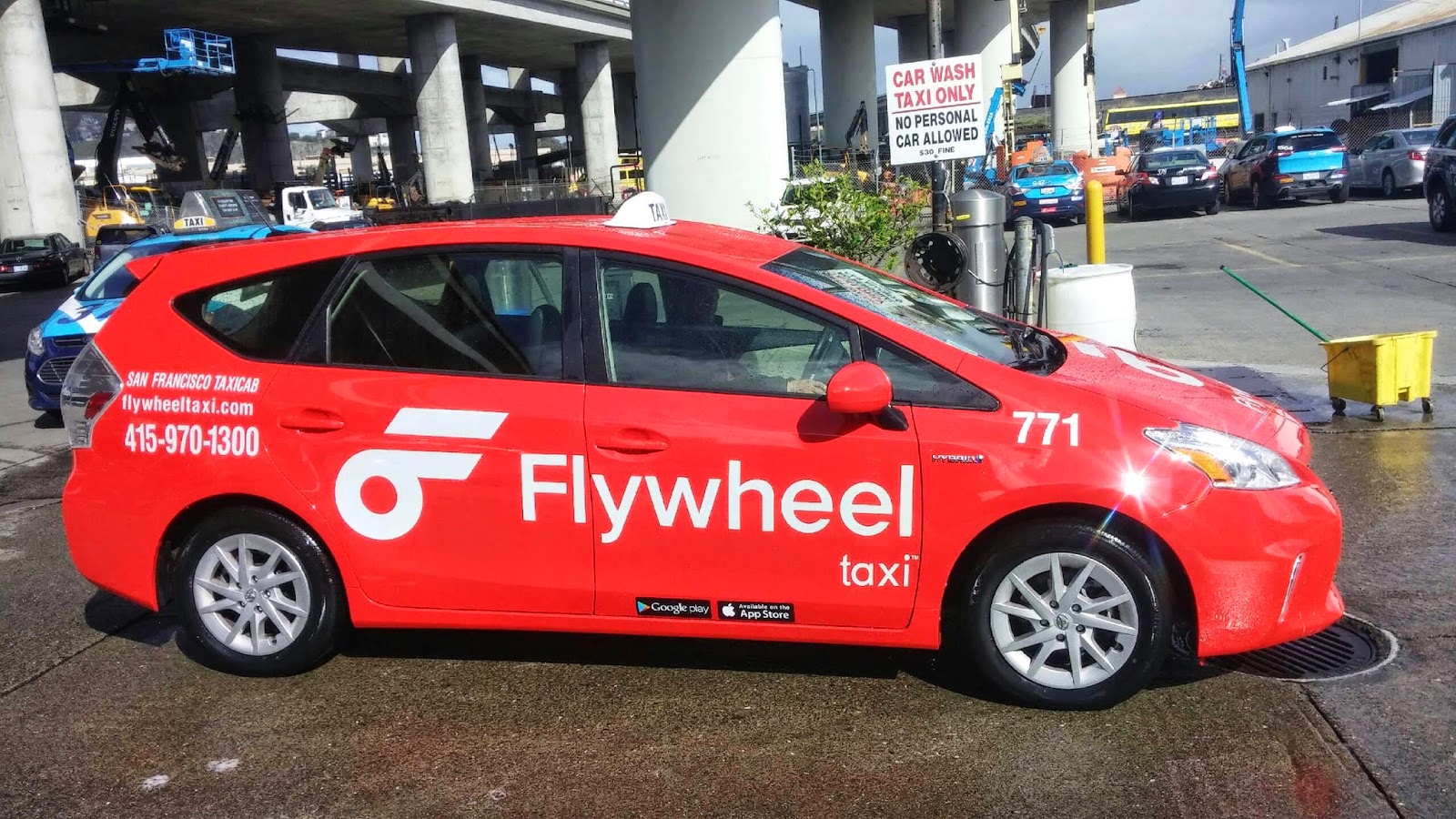 Desoto is changing its name to Flywheel and within two months the old blue & white Desotos will all look like the above pic. The first cabs are already on the street.

However, a bit of confusion and hostility surrounds the change.

Drivers at other companies who use the Flywheel app are apparently worried about losing rides. They shouldn't be.

Part of the agreement between Flywheel management and Desoto Owner Hansu Kim is that that orders will continue to be dispatched in the same way that they always have – the ride goes to the closest cab regardless of company.

What Desoto is counting on, according to part owner Matt Gonzales, is an "upsurge of advertising" that will cut into the TNC's market share and hopefully spread the wealth to everyone.

There some evidence that this is already happening. According to former Flywheel manager Sachin Kansel, the number of Flywheel orders has gone up six times over the last year.

Flywheel also has recently picked up several investors and a new CEO Rakesh Mathur who intends to use the money to advertise and expand the Flywheel brand across the country.

In addition, former Uber and Lyft customers are coming back to Flywheel because the TNC drivers are generally inept and don't know where they are going. The refusal of Uber and Lyft to fingerprint their applicants or train their drivers guarantees a continued flow of thugs and incompetents into the future.

As Flywheel becomes a more widely known brand we'll be getting more and more riders back – plus new riders who can now get cabs because of Flywheel in neighborhoods where they couldn't before.

In addition, Hansu Kim says that Flywheel is working on a new version of the app that will do things that Uber and Lyft apps can't. A current example of that is the ability to make advance airport reservations.

Luxor and Yellow Cab companies don't like it. Well ... of course they don't. The idea is bold, innovative and creative. As the leading dinosaurs of the taxi industry, John Lazar of Luxor and Nate Dwiri of Yellow have been doing everything they can to help themselves, and the industry, become extinct.

They are the ones who killed Open Taxi Access over four years ago. As you might recall, the SFMTA had allocated $405,000 to set up a universal app in all the taxis and John Lazar reputedly went backdoor to his former school mate and then buddy, Major Ed Lee, causing the measure to mysteriously disappear from the MTA's agenda.

At the same time, Yellow was feverishly holding back radio orders so that they could petition for more cabs. Let me spell this out: They were deliberately giving bad service so that the City would give them more medallions.

When Uber et al attacked and the dinos finally realized that taxi apps were the future, instead of embracing Flywheel as the de facto universal app, Dwiri had a relative design a Yellow app (that works about as well as the old Yellow dispatching system – that is to say, badly), and Luxor continued to back Taxi Magic – a dinosaur in its own right.

Even to this day, when Yellow can't begin to fill its shifts, they still keep drivers waiting two or three hours to start work so that Yellow can extort more money in tips. That there might be a relationship between their treatment of their drivers and the dwindling numbers of same has apparently never occurred to Yellow management.

Whatever – If it hadn't been been for the geniuses at Luxor and Yellow, Uber and Lyft would never have taken the market-share that they have.

BTW – Uber came out with a "study" that saying they did $500 million in business in San Francisco last year while the taxi industry only took in $140 million. But Flywheel calls this bullshit (don't blame me for the crudeness. I don't use such words – in print.) The actual figure should be $400 million for the taxi business.

One is that the Flywheel paint job does not make it clear that the taxi also takes flags and credit cards. In addition, the cabs I've looked at don't have the advertising space on top. That space could be used as part of a campaign for Flywheel/Desoto and against Uber – could be much effective than a bus because taxies go more places.

Another is that Flywheel has a website and blog that is slick and up to date but, as an advertising tool,  could be more effective.  The contrived pic in the blog makes it look a little too much like Lyft light.

There are also continuing problems with the driver support system such has holding drivers off the app for various minor reasons. I personally am not sure what all their rules concerning accepting orders and cancellations are.

Sachin Kansal and Steve Humphrey have moved on ("happily" they say – Humphrey upped his investment in Flywheel). Therefore, it seems a good time for the new management to meet with the drivers and take a look at some of the policies that might be changed, clarified or improved.
Posted by Crocker Amazon at 11:15 AM 3 comments:

Uber Win's an Award for What?

Posted by Crocker Amazon at 8:58 AM 2 comments:

According to the SFO ruling granting temporary permits to the TNCs, "All TNC Vehicles not actively loading or unloading passengers shall be parked in the designated staging area ... TNC Vehicles may only enter enter the Airport terminal if carrying an Airport-bound passenger or if a ride request has been accepted from a customer at the Airport."

In addition, there is supposed to be a "GeoFence" around the "Polygon" or perimeter of SFO where the TNC Apps won't work – call it a TNC dead zone. This means that the TNC Apps should only work in the TNC staging area and not anywhere else in or near the Airport.

But, in fact, the SFO doesn't appear to be enforcing its ruling and, of course, Uber drivers are paying little or no attention to it. The following sequence took place on November 16, 2014 between 9:18 pm and 9:28.

Photo One Shows an Uber cruising at the lower level of SFO with its App open and seeking a ride. 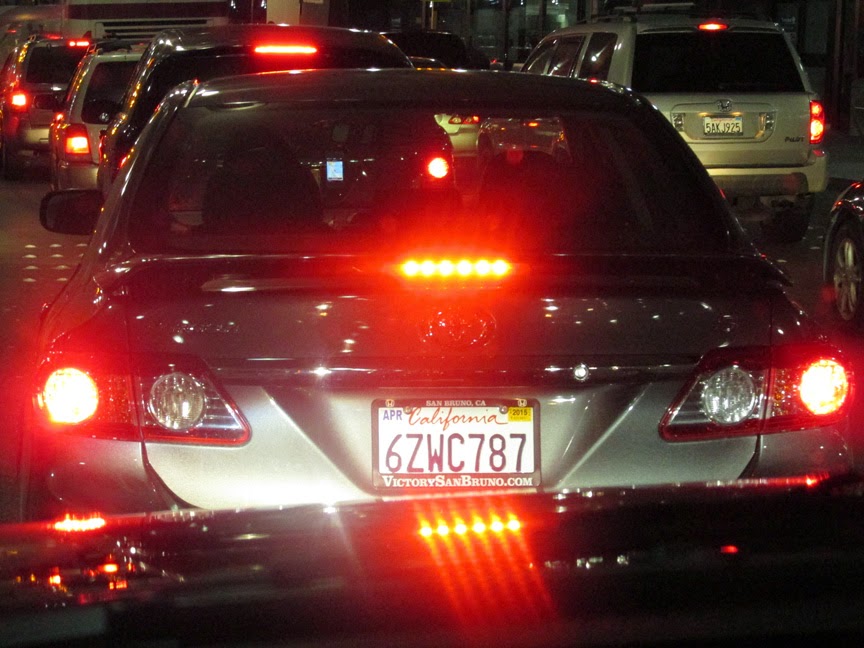 Photo Two show that this Uber has accepted an order. 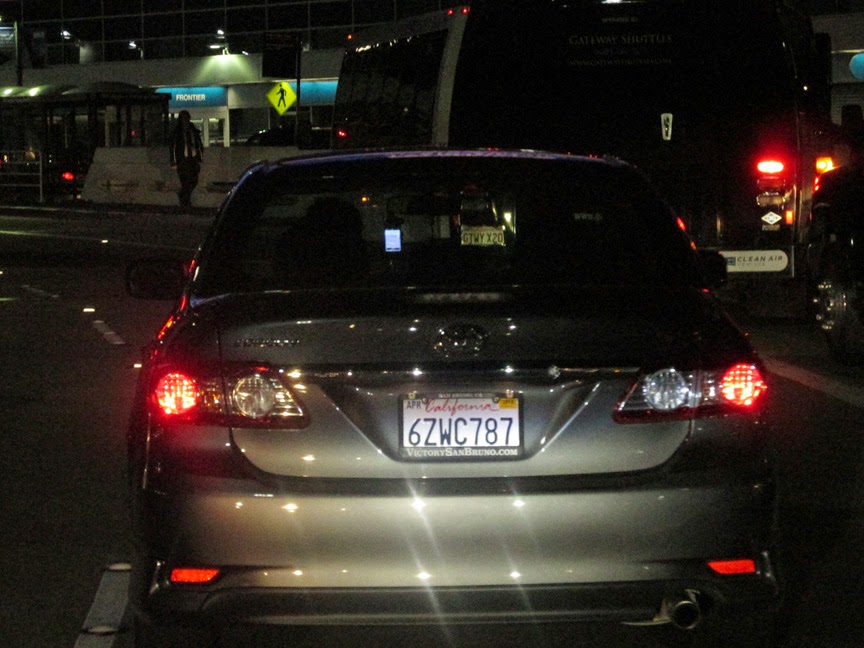 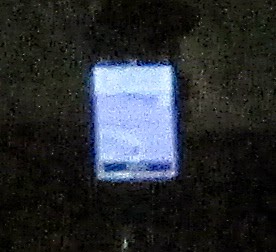 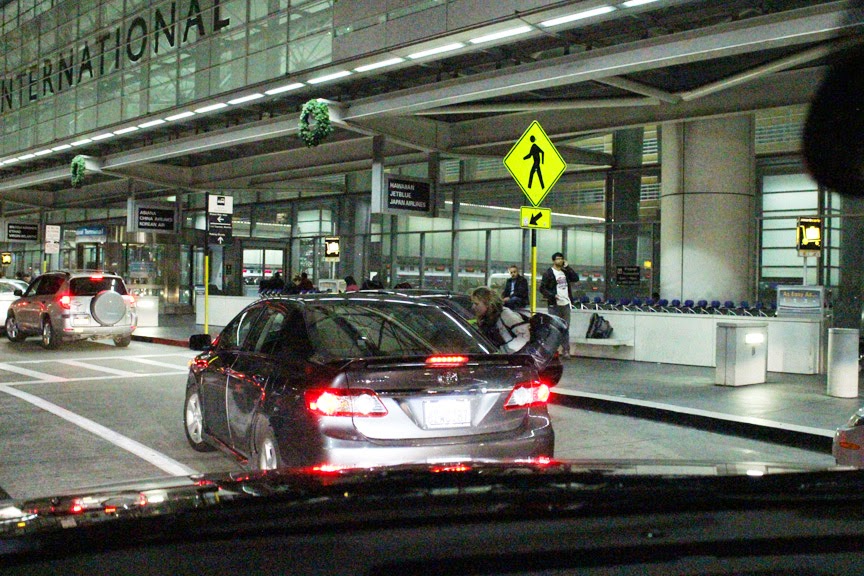 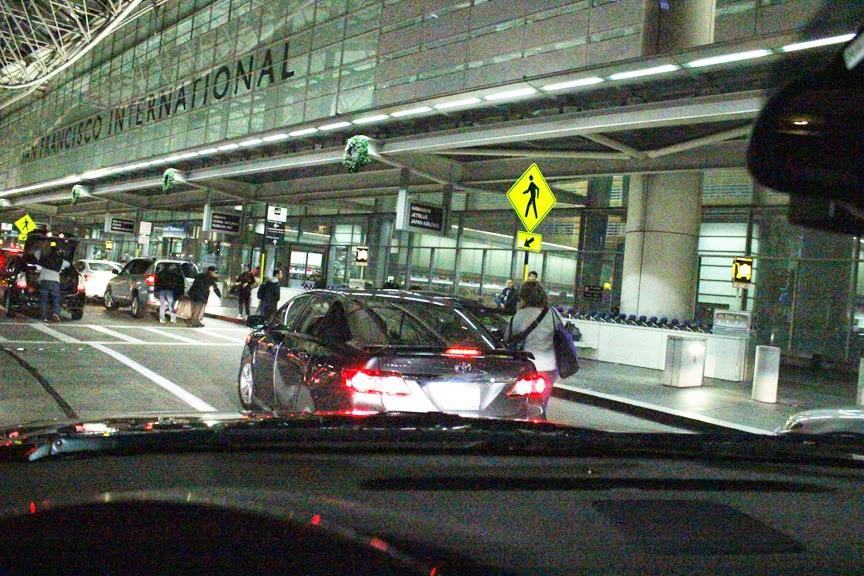 This was not an isolated incident. Quite the opposite. These photos were taken by limo and cab driver Douglas O'Conner and he sees more Ubers either hiding out on the top level of SFO or cruising with the app open ever time he drives through. 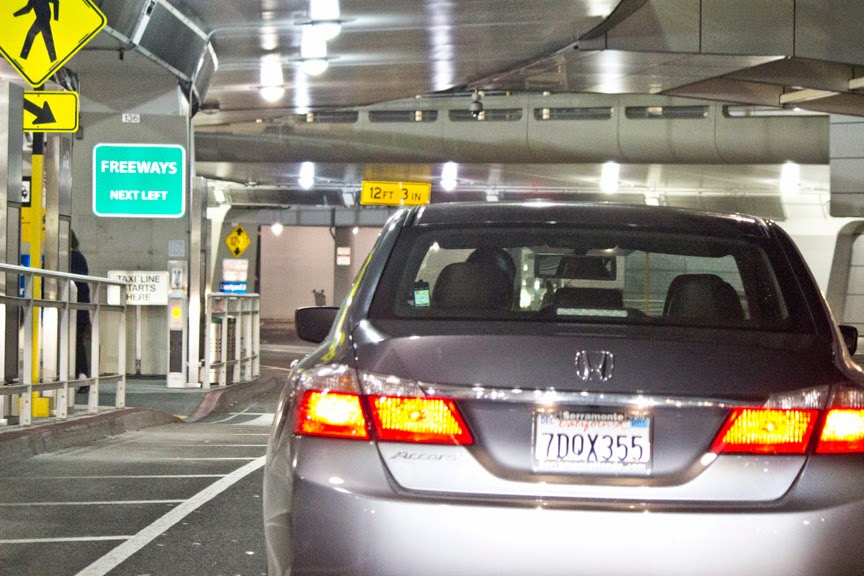 12-21-2014 An Uber cruises with the App open. The driver spent half an hour circling the upper level. 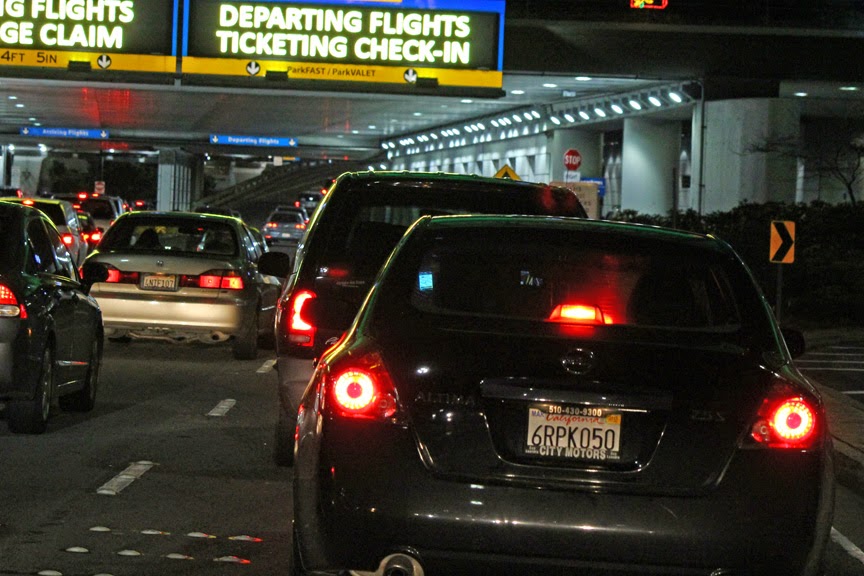 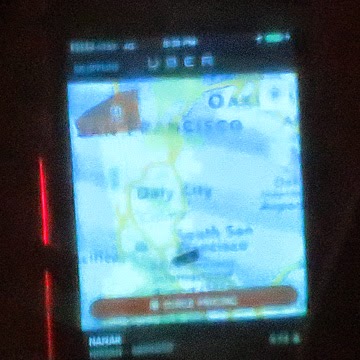 1-11-2015 An Uber hangs out on McDonnell Road after the driver spotted Doug following him. 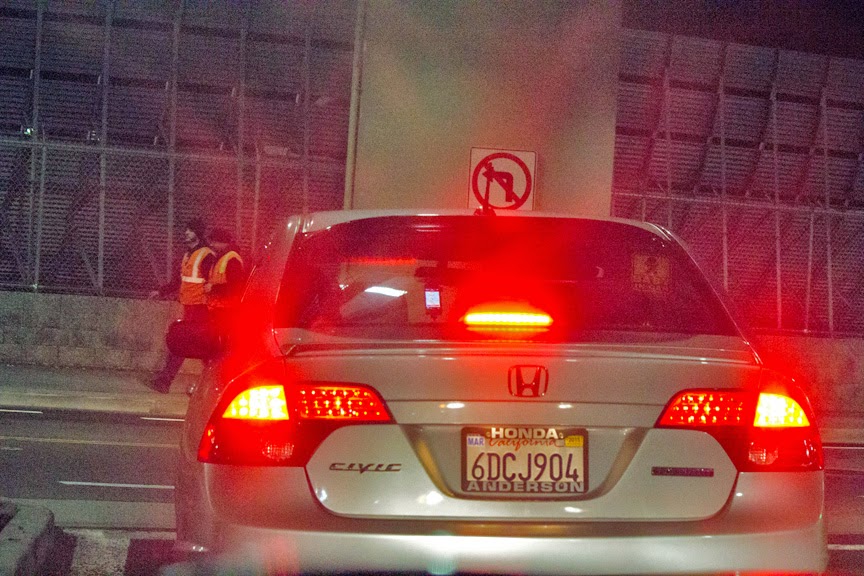 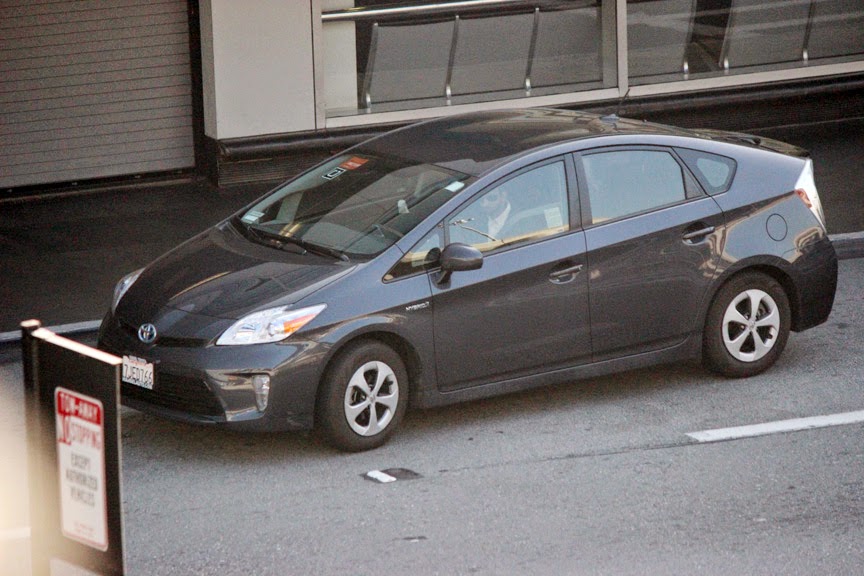 For Uber watchers this is hardly shocking. If Uber has ever shown any indication that it intends to obey any rule or regulation I'm unaware of it. This, after all, is a venture-capitalized corporation that is run by a CEO that has never heard a lie that he didn't want to tell himself. This is a corporation that lies to every customer and driver that downloads their App, unaware that they're signed away their rights to collect liability in case of negligence. This is a corporation that refuses to fingerprint or train its drivers. This is a company that makes agreements simply to get regulators off it's back.

And, they've succeeded admirably at SFO. I drove around with Doug on December 14, 2014 and we saw dozens of Ubers hanging out at various places on both the upper and lower levels but we failed to see one single SFO cop checking to see if the Ubers were there.

I recently ran into an Indian cab driver who said that America had become the most corrupt country in the world. He's got a good argument. The Indian government shut down Uber and even issued an indictment against CEO Travis Kalanick. And, China chased them out of the country for not obeying the rules.

Here, in California, the powers-that-be reward them by lowering or eliminating safety standards – let the public be dammed – and Uber still doesn't bother to pay any attention to what weak and pathetic rules they have agreed to follow.

And why should they? Here the long arm of the local law reaches out, not with hand cuffs, but with palms up and wide open.
Posted by Crocker Amazon at 11:12 AM 2 comments: