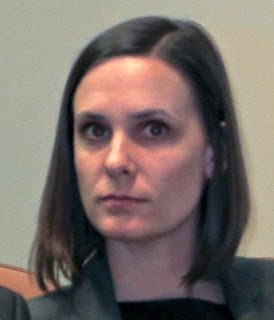 Uber made the SF Examiner last week for being against fingerprinted criminal background checks. As usual the venture capitalized corporation (VCC) is being given too much credit. Its VCC rival, Lyft, is also against fingerprinting – maybe even more so than Uber.

In any case, the arguments that Uber & Lyft made against fingerprinting before the California Public Utilities Commission (CPUC) hearings for regulating TNCs are almost identical.

I had intended to take part in the latest hearing but I wasn't able to do get my comments together in time. Instead I'll make my arguments here.

Since my favorite TNC attorney is Lyft's General Council Kristin Svercheck (Photo 2012 ), I'll mostly be using her reply comments from the CPUC proceeding (1) for my own comments.

Fingerprinted background checks are considered to be the best practice by law enforcement agencies throughout the world including: the FBI, the NSA, the CIA, the US Department of Homeland Security and INTERPOL.

Why? From One Standard for All, “A fingerprint-based check is the only way to verify a person's identity and ensure that criminal records found (if any) are for the right person."

Why? From The History of Fingerprints,  "Fingerprints offer a reliable means of personal identification. That is the essential explanation for fingerprints having replaced other methods of establishing the identities of criminals reluctant to admit previous arrests."

Why? From an INTEERPOL forensic symposium,  "Since a person’s fingerprints are unique and do not change during the course of their life, they can be used to quickly and efficiently confirm or disprove a person’s identity ..."

The main exceptions to this are few rare diseases that affect only a few extended families word wide. The odds are over 3 million to one against a person having these diseases.

The simple truth is that the best, quick way to know that a person is who they claim to be is fingerprinting.

"Fingerprinting is not necessary to ensure public safety."

Just to clarify: What she is saying is that the technique that is considered the best way to identify people with criminal pasts – especially people convicted of sexual, violent or dangerous driving crimes –  by the FBI, INTERPOL et al is a waste of time.

If one is going to undermine or disprove a method that has been shown to be effective millions of times by the world's leading experts in identification, one would think that one would have to come up with very strong evidence. You know –  statistics, body count comparisons, etc.

So what does Lyft give us?

"There is no evidence that ... current TNC background check requirements are not adequate and effective."

A double negative? This is the kind of argument used by attorneys on Law and Order when they are defending the Mafia.

Once again, it should be up to Svercheck to prove that TNC background checks are as effective a deterrent to crime as fingerprinting – not the other way around.

On the other hand, I never suspected the General Council of having sense of humor. I stand corrected for, when it comes to proving that Uber and Lyft's methods don't ensure public safety, the evidence is seemingly endless. It's hard even to know where to start?

How about the Uberx driver with the reckless driving record who killed Sophia Liu?

Or, the City of Houston's investigation into Uber & Lyft's back ground checks by the FBI which found "several drivers with prior criminal histories including indecent exposure, DWI, prostitution, fraud, battery, assault, robbery and aggravated robbery?"

The investigation was started after an Uber driver who raped an intoxicated passenger was found to have spend 14 years in federal prison. "Houston said that the driver would never have passed its fingerprint-based background check conducted by the FBI."

Or, the Uber driver who exposed himself to a female passenger and was found to have numerous past crimes and traffic violations?

Unfortunately, I could go on and on.

Svercheck spends a lot of time explaining a complicated process but I don't feel the need to waste much ink listing her arguments. Instead,  here's a quick listing of the weakness of name and social security based checks from Mentor – a national mentoring partnership.

Mentor goes on to say that "A fingerprint-based check is the only way to verify a person's identity..."

Finally, we have an Uber driver explaining how to get around background checks in ValleyWag,

“[Uber's] background check is done through a third party called Hirease. It consists of filling out your name, address, DL & SSN online. That's it. Every taxi company I worked for required drug screening and livescan fingerprinting at the local police department before being issued a taxi driver permit. … One person could fill out all the info and hand off the approved account to another person. You can't do that in the taxi world ….”

I wonder if it would be possible for a person to file off his or her fingerprints and get job at Lyft? Judging by my own experience of applying to drive for Lyft I think so. One could wear gloves during the 3 minute personal interview. Si, no problema.

This is turning into a bigger project than I anticipated. Council Svercheck apparently thinks than an accumulation of bad arguments will somehow equal one good one. We shall see.

(1) REPLY COMMENTS OF LYFT ON ASSIGNED COMMISSIONER AND ADMINISTRATIVE LAW JUDGE’S RULING AMENDING THE SCOPING MEMO AND RULING FOR PHASE II OF PROCEEDING OF RULEMAKING 12-12-011
June 8, 2015