Uber Hypocrisy at SFMTA Meeting: or, the First Casualty of Venture Capital is truth 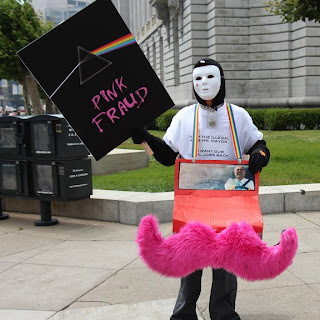 Speaking at the SFMTA hearing on the Vision Zero plan for a Safer Market Street, Mark Gruberg of the San Francisco Taxi Workers Alliance spoke to the "hypocrisy of Uber" being in Sacramento claiming that they should be "exempt from commercial vehicle" registration at the same as they were in San Francisco wanting "the privileges" of commercial vehicles.

This seemed to become a moot point when both Uber and Lyft speakers later backed the plan.

However, their endorsement for a Safer Market Street really was yet another demonstration of their posturing and mendacity because they primarily gave their support for two reasons: they realized that they were not going to be allowed to use transit lanes in any case and it gave them a chance to undermine the taxi industry. 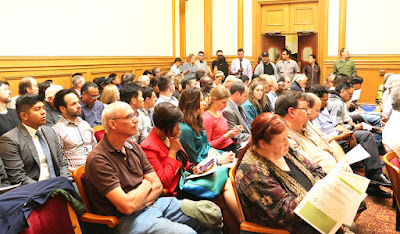 Taxi and TNC drivers packed room 400 at City Hall to give their opinions on the Vision Zero plan for a Safer Market Street. The goal of the plan is "to eliminate all traffic fatalities by 2024".

Uber drivers were there to demand access to the red transit lanes and the cab drivers came to stop this from happening.

However, early signs indicated that the members of SFMTA Board were predisposed in our favor. Director Malcolm Heinicke appeared to support taxicabs on another issue and Director of Transportation Ed Reiskin had signed off on a presentation to the CPUC calling for stricter regulation of TNCs. Perhaps most important, the SF Bicycle Coalition was in favor of the plan – they rarely lose political battles in this town.

Why People Use Flywheel & Taxis Instead of Uber or Lyfts: Part II or No Small Print

In my last post, I left out one obvious reason why people are leaving Uber & Lyft for Flywheel and that is  price-gouging or "surge-pricing" as they euphemistically call it.

One former Uber customer who switched to Flywheel told me that he thought the so-called formulas that Uber uses to raise the prices are, "Bullshit! They just do it because they can," he said.

"You know," a businessman explained, "you just get used to doing something and you keep on doing it. Then, suddenly it gets to be too much ... One Friday night I went from the Marina to North Beach. When we got there, I learned that they'd charged me 3X. Three times the normal rate – almost $30 to go a mile and a half. That was it. It's taxis from now on."