The Taxi Advisory Council spend much of their time last Monday articulating their goals and structuring their future meetings with the aim of having a report on the Pilot Plan ready by the end of the year. (If you click on the photo you can blow up a good summary etched by Chris Hayashi.)

The subject of electronic waybills was also discussed. Director Hayashi pushed for them because they would end the possibility of anyone handing in fraudulent waybills and allow her to gather accurate information on taxicabs for the 1st time ever. Many drivers, on the other hand, were less enthusiastic about the idea. Council member Bill Mounsey especially disliked them because he felt that an electronic watchdog would restrict his freedom.

During public comment, Driver Eric Hattan brought up UberCab - an illegal, high-tech taxi service that is using San Francisco as a beta test before going into other markets.

But for me, the most interesting facet of the afternoon was a brief preview of the "Gates and Gas" (GG) vs Long Term Lease (LTL) debate. 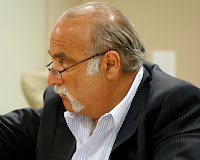 Counciler John Lazar of Luxor cab showed concern over the fact that most of the buyers were opting for the LTL. He said that:
During public comment, Hansu Kim expressed the fear that the industry would go totally LTL and that the cab companies would become little more than radio services in the future. Other speakers, including myself, thought that LTL drivers didn't take radio calls and hung out either at the airport or downtown - thus reducing the level of service to the neighborhoods.

TAC decided that they needed to know: 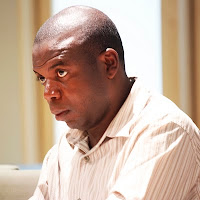 People also wanted to know how many drivers had lost their jobs and what had happened to them but one of the company managers didn't think that there was any way to find out this information. Meaning they don't keep records of who works for them? Or, perhaps he meant that he didn't know what happened to the drivers after they lost their shifts.

Council member Timothy Ajaegbu (right) said that he was very concerned about this trend because he is a gates and gas driver.

A further and deeper discussion of GG vs LTL is on the agenda for next week.

If you are concerned about your shift or the future of the taxi business, you should try to be there. The turnout so far has been amazingly small. You don't know what you've been missing. This is better than Reality TV. For one thing, it's really REAL.
Posted by Crocker Amazon at 9:50 AM