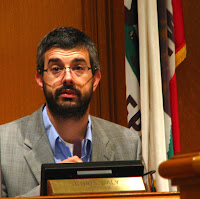 Supervisor Chris Daly shocked a room full of cab drivers this morning when he passed around a note saying that he had withdrawn his charter amendment regarding taxicabs. There was no explanation given so the matter is open to speculation.
One possibility is that he realized that the Two-thirds Rule predicted by a certainly blogger was indeed working against him. In fact, my sources tell me that the UTW was outnumbered eight to four at the general Board of Supervisors meeting on Tuesday June 30.
This may have opened Daly's eyes to the reality behind the UTW's claim to represent most of the cab drivers in San Francisco. In fact, the UTW was itself divided over Mark Gruberg's insistence on putting medical benefits in the proposal because this kept the SFCDA from backing it. Instead the SFCDA lined up alongside the MHA against Gruberg.
At least one medallion holder who had attended the meeting thought that the rest of the Board had turned against Daly on the issue.
Daly may also have been influenced by City Controller Ben Rosenfield's financial analysis of the amendment which stated that "the estimated costs of the proposed benefits represent 30% to 100% of the (taxi) industry's gross revenue. If the taxi industry absorbed some of these costs, it would need to increase revenue ... possibly by increasing fares, or by some other means."
Another way to put it might be to say that the amendment wasn't financially feasible.
In any case, Supervisor Daly appears to have seen the writing on the wall and it spelled out defeat.
For the rest of us, count it as one victory in a long war.
Posted by Crocker Amazon at 4:39 PM