Why I Am Not Standing with "THE" Drivers 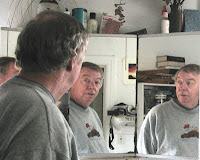 A long-time, cab-driving friend of mine demanded to know why I "chose not to stand with the drivers" on the issues of their recent MTA protest and also demanded to know "who appointed" me to defend Chris Hayashi.

The fanatical, "you're either for us or against us,""she's guilty - why waste money on a trial?" tone of my friends interrogation pretty much answers these questions by itself. I was right. The protest was an ambush. And, the fact that my friend, who is ordinarily intelligent and thoughtful, should be so filled with anger and fear that she wouldn't even listen to another point of view is yet another reason for me to stand against "THE drivers."

As for the Deputy Director, when you consider all the things she's done for the taxi industry and the drivers, she shouldn't have to be defended for trying to create another "win-win" solution to a difficult problem.

More reasons why I don't stand with THE drivers.

I've been a cab driver for over twenty-five years and I've always found that one of the greatest virtues of my fellow professionals is that they do think for themselves.
Therefore, whenever I speak my mind, I am standing up for THE cab drivers of San Francisco.
Posted by Crocker Amazon at 2:51 PM