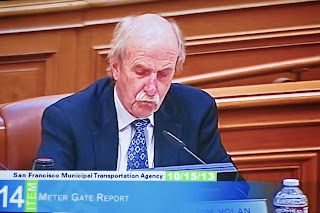 The SFMTA Board under the direction of President Tom Nolan (photo) put off a proposed meter increase of $9.75 per shift but authorized dispatching services to charge a cancellation fee of up to $10 for no-goes and allowed cab drivers to charge a flat fee of up to $11 per person for shared rides. The Board also amended several sections of the transportation code with the aim of putting an end to illegal brokering.

... was the most hotly debated item on the agenda. Its presence there was also a little weird.

Director of Taxi Services Chris Hayashi, Dr. Dan Hara, Luxor Cab's Charles Rathbone and (maybe) Hansu Kim of Desoto spoke in favor of the item but they all stated that nobody would be raising the gates now. The reason? Taxi companies are losing drivers.

Then, why raise gates? Director Hayashi said that it was part of the process that Dr. Hara and Taxi Services had been working through and that its time was now. She said that it would give owners the flexibility to make future changes – an idea concurred with by Dr. Hara and Mr. Rathbone. Hayashi and Hara pointed out that the gates had not been raised when the meter was raised in 2011 and an increase thus was long overdue.

The Director apparently has a short memory. The reason that the gates were not increased along with the meter was hardly an oversight. It was a quid pro quo to the drivers for charging credit card fees to them instead of the the taxi companies as it had been done before. And, this deal was brokered by Director Hayashi herself.

In my opinion she deserved kudos for this. It was a job well done. The drivers were charged 5% for the credit cards. The companies ate the gate increase. My math showed that the drivers were much better off under this arrangement than they would have been if the companies had continued to pay the credit card fees and upped the gates. Many drivers didn't agree and stopped taking credits cards in protest.

Tuesday's attempt at legislation started out as another quid pro quo thought up by Director Hayashi. This time she intended to balance things up by finally giving the companies their meter increase at the same time as she removed credit card fees from the drivers by passing a fee onto the riding public.

Fine – except for the ancient wisdom that "you don't raise the price of gas during a gas war."

In the end, Hayashi understood that and nixed the idea of out of raising the drop on the meter but she somehow missed out on a few other cliques.

Raising the gates would be like throwing gasoline on the fire of the drivers' frustration and adding insult to injury from a city whose mayor has slapped cab drivers in the face by embracing illegal taxis.

I don't how the Director failed to see the despairing effect that the mere mention of a gate increase would have on the drivers at this time. Maybe she needs to broaden her circle of advisors.

In any case, several drivers, including myself, expressed our frustrations at the meeting. The general opinion was that raising the gates would chase cab drivers out of the business at an even faster rate then they are leaving now.

The SFMTA Board – especially Director Cristina Rubke and President Nolan – discussed the subject at length with Director Hayash and Dr. Hara before finally deciding to go ahead with the rest of the agenda and putting off a possible gate increase for another six months.

In my humble (Ha ha – have you ever met a humble cab driver?) opinion, any gate increase should be another quid pro quo. When passengers are ready to pay an electronics fee to cover credit card charges, the companies can get their gate increase ... assuming of course that the arcane and antiquated gate system is still around.

How can this come about? How can we compete? Complicated questions? The cancellation fee is a step in the right direction. The universal app will be another. With 2,000 taxis on the same system we can start taking back the business we've lost.
Posted by Crocker Amazon at 2:04 PM