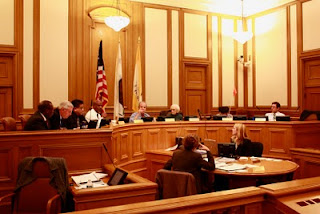 With a vote of 7-0, the MTA Board made history by unanimously okaying Prop-K reform and passing the Pilot Plan.

The meeting, which didn't start until almost 5 PM, had the air of a foregone conclusion about it. The room was half full and only three people spoke against the plan. The usual people, with the addition of Murai, spoke in favor of it.

The people who are financing the loans (called "my suits" by Chris Hayashi) confirmed that they were willing to grant loans on the basis of a Fixed Rate of $250,000.

That's it folks. It's a done deal. Now we'll see how it works out.
Posted by Crocker Amazon at 7:45 AM