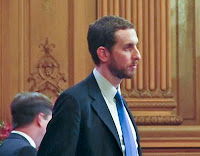 The Board of Supervisors failed to pass a resolution "opposing proposed taxi fare increase under consideration by the Municipal Transportation Agency in the absence of improved taxi service" yesterday because it did not have unanimous support.

Sponsored by Supervisors Scott Weiner, Malia Cohen and Mark Farrell, the measure required a unanamous vote because it had not been discussed in a committee.

We didn't realize that the public would be able to address the subject until the Board was already in session so only Mark Gruberg of the United Taxicab Workers, Barry Korengold of the San Francisco Cab Drivers Association and myself argued against the resolution.

Gruberg said that we needed a raise because we hadn't had one in eight years; Korengold mentioned that the SFMTA Board had failed to implement Open Taxi Access which would immediately improve service to the neighborhoods; and I commented on the weirdness of Democratic politicians, the party of labor, refusing to back a cost-of-living raise to working people. We all expressed a sense of unfairness at being punished for problems beyond our control.

The Board, however, had already decided the issue behind closed doors - this time to our advantage. Supervisor Weiner said that the resolution did not have the necessary support so no vote was taken and the measure was tabled until the Board's next meeting.

Weiner went on to say that the resolution was not intended as a criticism of cab drivers but that we needed more taxis on the street. He just thought that any meter increase should be coupled with peak time cabs.

Supervisor John Avalos, from my District 11, true to his labor roots, spoke against the measure saying that taxi drivers needed a fare increase.

Supervisor Malia Cohen, from District 10, remained adamant in her belief that there should be no meter increase until cab drivers start picking up in the Bayview.
Posted by Crocker Amazon at 9:23 PM