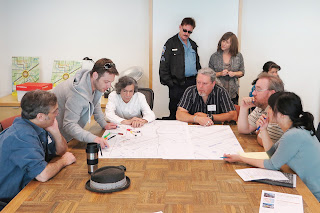 A taxi Workshop was held last week as part of the Waterfront Transportation Assessment Project. The meeting was aimed at improving taxicab access and service at AT&T Park before, during and after ball games as well as other events.

The SFMTA was represented by Peter Albert (standing to my right in the last photo) who is heading the project, Project Manager Erin Miller (standing along with PCO Supervisor Gregory Sedlock in the lead photo), Taxi Services Director Chris Hayashi and Project Manager Carli Paine.

Taxicab drivers were represented by the usual suspects plus a few others.

Erin Miller suggested that we break up into three groups and that each team come up with five ideas to improve drop-offs and pick-ups. 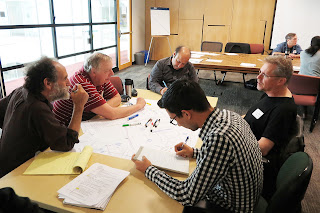 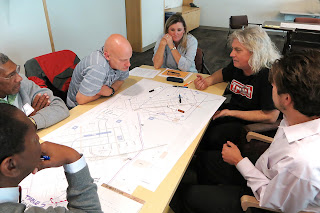 We were encouraged to write or draw our recommended changes on maps of the area around AT&T. 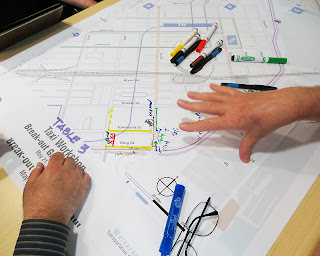 Then a spokesperson for each group presented their proposals. 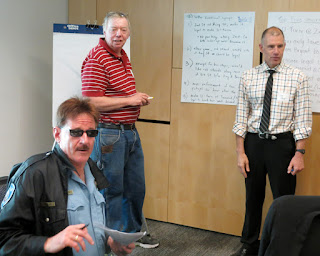 There appeared to be general agreement on the following ideas:

1. There should be better signage directing customers to cab stands. Colim Marcoux (third photo – white hair) suggested that flashing signs inside (or outside?) the ball park could be used for this purpose.

2. There should be a Taxi Only lane on 2nd street from Bryant to King streets.

3. The cab stand on 3rd & King should be moved to the East side of the street and extended from King up to Brannan (expect for the bus stop).

4. Since the Cal Tran station at 4th & Townsend functions as a cab stand, taxis should be allowed to make legal U-turns there.
5. Traffic (except for taxis) should be turned from the Embarcadero onto Brannen after the games.

Mark Gruberg of the UTW said that a cab strand should be placed on the south side of King directly in front of the ball park.

Other drivers thought that limos should have a separate staging area. Trevor Johnson of the SFCDA suggested that the 3rd street side of the park would make a good place for limos so they could form a line "all the way out to the Bayview."

Most drivers where also in favor of having a non-enforcement rule for taxis dropping off and picking up for an hour after the game. This idea appeared to meet with something less than enthusiasm by PCO Sedlock and the project managers. I think the concept needs clarification.

None of us are suggesting that we make a cinéma-vérité version of The Purge with PCO's desperately fleeing avenging cab drivers. By all means ticket red-light running or any other dangerous moves.

However, the reality at these events is that there is going to be a great deal of chaos. Traffic is usually heavy and regularly gridlocked before the games, making it difficult or impossible to drop-off in a cab stand. And, after a game,  people run and flag the first taxi they see whether it's in a cab stand or not. It's not reasonable or efficient to expect them to walk a block when there is a cab right in front of them. Double-parking (typically for less than half a minute) is often the only realistic option.

Drivers should be allowed to drop-off or pick-up customers wherever it can be done safely without fear of being ticketed for minor, frequently imaginary infractions. So many drivers have been hit with bogus tickets after games that many of them won't go near the ball park. If the city really wants taxi drivers to do a better job at AT&T, the PCO's are going to have to change their mind-sets from one of "busting violators" to one of helping customers get to and from ballgames.

Fortunately, it sounded as if Peter Albert, Erin Miller and the other city representatives in the room enthusiastically embraced this point of view. Director Hayashi also promised that taxi drivers would no longer be harassed and that the eight newly hired investigators of Taxi Services would help out at the ball park.

Ever the skeptic, I said to Hayashi after the meeting,

"Well, they really listened. Do you think they'll actually make the changes?

"Of course," she replied. "Everybody knows things aren't working now."

Photos by Chris Hayashi
Posted by Crocker Amazon at 9:48 PM