All the above and more were discussed at a recent Town Hall meeting.

On May 31, 2013 Dan Hara will be handing in his final recommendations, which will include whether or not there should be gate and/or meter increases. There will be Town Hall meetings to discuss the issues on June 11th and the MTA Board will look at and possibly vote on the proposals on June 18, 2013.

Not to editorialize but:

1. No businesspeople in their right minds would raise their rates when they are being successfully underpriced by their competition.

2. It's time to get rid of gate fees and replace them with a split of the meter. I've been saying this ever since I was first hired by Yellow Cab and saw the corruption and incompetence that the gates & gas system caused. And I repeated my ideas to the MTA the moment they took over. The bottom line is that a gate system makes leasing to drivers the business of cab companies - not picking up customers.

There are companies like Desoto, Luxor and Green who consciously try to give good service but they are in the minority. I won't rant about the details. I've already done this enough. The primary problem is simply that the profits and losses of the companies are not directly linked to the amount of business that they do. If the meter were split, the MTA wouldn't have to conduct arcane studies to find out which companies were good and which were bad. All that would take care of itself - and service to the public would drastically improve.

I've said this so often that I sound like a crank but the future lies with me. (See Uber. It might also be a good idea to take a Business 101 course along with a double dose of common sense.) 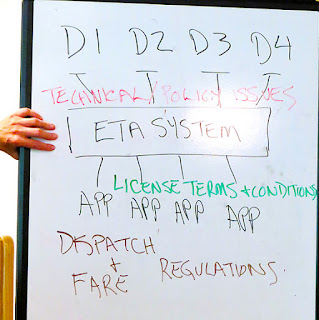 I didn’t catch the entire meeting and Director Chris Hayashi (photo, hand) was still presenting the proposals when I left so I can’t give definitive summary. The final plan won’t be presented until May 31st but the following covers what little I do understand of the system.

1. All available taxis will appear on the map of a customer’s smartphone.
2. The MTA itself will create no app but rather will co-ordinate hails from Flywheel, Uber's taxi app and other legal apps.
3. All the information from the individual apps will be routed through a central system in order to appear on the smartphone.
3. The exception will be calls to dispatch services and e-hails from single company apps like Luxor or Desoto’s.
A. However, these calls and e-hails will be integrated with the ETA system so that only one cab will be sent to each order.

In other words, this will be the centralized dispatch system that drivers have spent thirty years lobbying for.

1. The App Fees will be paid by the customer.
2. There will be a Technology Fee to be paid by the customer instead of credit card processing fees paid by the drivers.
3. A $10 No Go fee also will be automatically deducted from customers’ credit card if they aren’t there.
4. The “Response Time Fee” listed on the white board above is being renamed a “Premier Service Fee.” It will be paid to a driver if his or her taxi gets to a customer within a promised time like under ten or fifteen minutes. Yes this does mean that a driver will get a bonus picking up a ride in time.

Needless to say there are criticisms:

1. ETA won’t improve service because taxi drivers will take a flag before they will take a dispatched call. As the saying goes, a bird in the hand is worth two in the bush.

Well, that depends upon the birds in question doesn't it? Seriously, if you think about it, you are often closer to dispatched calls - unless you spend all your time in Union Square.

Take my situation for instance. I start driving from the inner Bayview at 4 pm. It takes me five minutes to get to the area around Zynga and Adobe where I can pick up flags, and another three to five minutes to get to either Market Street or the cabstand at Cal Trans. All that time I'm within five minute or less of dozens of businesses where people might want taxis.

The unwritten rule is that a driver shouldn't take dispatched calls during rush hour because most of them will be No Go's. The reasons for this are that you don't how old the orders are and the people have probably called three or four companies.

With ETA both these problems disappear. Your cab will be the only one sent to the order and you'll get the No Go fee if the party isn't there. In addition, with all hails going through one dispatch system, you'll have at a minimum of three times more orders to choose from.

2. This will discriminate against people without smart phones or with Paratransit cards.

The orders will be dispatched in such a way that a driver can’t tell what type of order it is.

3. If so, drivers won't take the hails because they might not get a No Go fee.

This comes from the meeting. Cab drivers, man. So many of us look only at the empty side of the hourglass. Eighty per cent of the people in S.F. have smart phones and people who don't have them don't take as many taxis as people who do. Furthermore, No Go's on Paratransit rides are rare.

The percentage of No Go's will be extremely rare on with ETA and the odds of getting the fee if the customer isn't there are better than 90%.

The Age of the Dinosaurs...

... reputedly passed over 65 million years ago but a few survivors are hanging on in the taxicab business in the personas of John Lazar and the management of Yellow Cab.

Mr. Lazar reputedly killed Open Taxi Access a few years back and is out to waste ETA as well. The problem for him is that it's not as easy to buy politicians as it was back in the day. With Lyft and Uber on the scene the price of corruption has sky rocketed.

On the other hand, maybe Lazar is getting a kickback from Uber and Lyft. The balkanization of the dispatching services in this town is what opened the floodgates for the illegal apps in the first place. The adoption of an ETA system would be the best weapon we could possibly use against them.

But the President and General Manager of Luxor Cab is still living back in the Jurassic Age when the companies with the most medallions necessarily made the biggest profit. If he succeeds, all he's likely to win today is a large cut of a dying industry.
Posted by Crocker Amazon at 1:29 PM